I was recently exploring some of Robert Shiller’s online data and noticed that he had some historical housing data on Chicago from the 1970s and 1980s.  I was curious what the data looked like after adjusting it for inflation and comparing it to more recent housing prices. Conventional wisdom says that home ownership is one of the best investments that can be made.  This is because it is an investment that you can use on a daily basis on top of being  an asset that could potentially appreciate in value over time.

As you can see in the table of the results, the nominal home prices have increased greatly over the past few decades, but the rate of growth over inflation is much smaller than you would have thought given conventional wisdom. 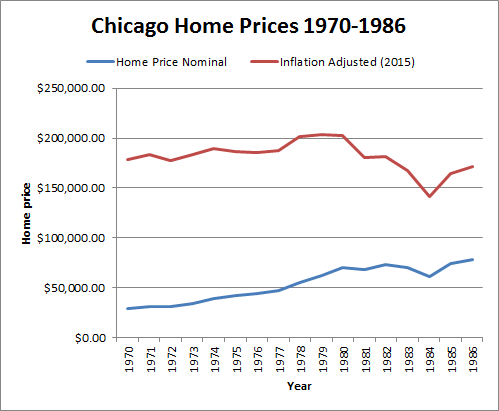 The raw housing data is available on Shiller’s website, and data for Dallas and Atlanta are also available.  The inflation data is from Westegg.

The BBC recently reported that Wealth of people in their 30s has ‘halved in a decade’ in the UK.

I ran the numbers for the United States using data from the US Federal Reserve and the results are shockingly similar. Using data from the most recent report from the Federal Reserve, people in their 30s have had a dramatic drop in net worth from $57000 prior to the recession to about $25000 in the years after the recession.  That is drop of over 55%! Even if you compare against numbers from 20 years ago, the wealth of people in their 30s today is half. Among the reasons for this are increased costs of education, reduced earnings, and higher health care costs.

Tips! Hover over the bars to see the exact amounts.

These trends are telling since this means that the younger generations are not able to build up the same levels of wealth as those who came before them.  With the upcoming election, it is not surprising that the younger generations have been attracted to relative political outsiders such as Bernie Sanders, Gary Johnson and Jill Stein who promise greater opportunities to those who have not seen much of the benefit of the recovering economy.

Looking at the median income for these households, income for these same households has dropped 13%+, since the recession and has not yet recovered. It is not as dramatic as the drop in net worth, but that 13% drop has basically handicapped many young adult households from being able to save.

The data for these charts came from the US Treasury. All of this data is freely available there for you to perform your own analysis and fact checking.

If you would like to play around with the 2013 net worth data, check out the net worth rank calculator. Net worth is defined at total assets minus total debts, including housing, vehicles, cash, investments and retirement accounts.

TL;DR The households of the 1% by income compared to the normal US households are White, college educated, professionals, work in services and are older.

If you want to become one of this very wealthy group in the future, go to college, get married and become a working professional. Here are some mobile-friendly charts and visualizations to explore the demographics and composition of who makes up the highest income earners in the US are and what they did to get there. Calculate if you are in the 1 percent by income.

Tip! You can hover or click on the graphs for more detailed information.

The households of the 1% have a median income over 22 times as high as median for all US households. This is a tremendously large advantage to these wealthy families to build their net worth.

Looking at their net worth, they are even wealthier at 93 times as much wealth than the median US household. It seems as though the highest income earners are able to save and build a disproportionately large amount of money compared average Americans.

Generally, 1%er households are older, with almost none younger than 35 years old.

Compared to overall US population, the head of households of the 1% tend to be much more highly educated. Almost all of the highest income earners in the country have college degrees.

The 1% is overwhelmingly employed in white collared professions. Here’s an explanation in more detail of which jobs fit in which category:

The families of the 1% also tend to be much more likely to be married. Stress over money is one of the major contributors to divorce, so their wealth may help stabilize marriages.

The 1% have a higher percentage of white people than the households of the overall US population. The non-white category includes Hispanics.

The 1% primarily work in non-production based industries. Services & Other includes high income industries such as finance, insurance and real estate (FIRE). Here’s an explanation of the groupings: 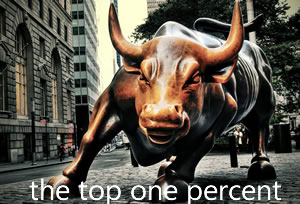 Note: The data used to generate these graphs are freely available from the Federal Reserve SCF. There is a known tendency for the SCF to over-sample the ultra-wealthy, such as the 1%, which causes the numbers from the SCF to have higher income and net worth of the 1% compared to other surveys. Use this data for generalizations on the 1%, but keep in mind all sampling of this group are hard due to low response rates.

How does a personal cost of capital translate to my own personal finances?

For most people your personal cost of capital will first be:

Everyone’s cost of capital will be different due to varying options and opportunities.  It will also change over time as you progress through life.

Let’s say you went to college and have student loans.  You’re getting a $1,000 bonus at work. Further, you already have 6 months of savings in your emergency fund. You aren’t sure which of these options you should take:

In a business, we would look at these options and say, Option 2 is the cost of capital that we’re going to use to compare the other options against. It has a good return, low risk, and low effort. Your next decision would be whether or not to go for option 3. It has an even higher payback, but would require more research on what your plans and goals are in the future.

This concept should help structure your thoughts around how financial decision is going to affect you.  Finally, there are going to be a lot of other factors that will impact your final decision.  Your personal cost of capital is a small piece to help to put numbers around it. But, remember money is a tool not the goal, so put your money to the best use.

Last year I moved into a city which had much older housing stock than other cities that I had lived in before. I was under-prepared for the housing market here, because I had not researched the factors that you should look into for older homes which vary a lot depending on the era that they were built in.  I created this interactive mobile friendly map to visually help show the differences in regions and counties.