Update 5/9/2020: So I decided to restart using Imperfect Produce because it seemed like a nice supplement to get food delivered with the shelter in place warnings. Imperfect Produce is now called Imperfect Foods and has expanded the product lines to some dry goods (grains), dairy, meat and seafood.

In terms of cost, it looks like the box fee went away and everything is a-la carte so you don’t need to sign up for the Meat & Seafood, Grains, or Dairy packs to actually get those things. Dairy, Meat, & Seafood is shipped inside an insulated box with an ice-pack. If you’ve done Blue Apron, it’s basically the same set up. I think in terms of pricing and quality everything seems about the same as before when I wrote this article a couple years ago. In general, the pricing is fair-ish but not really cheaper when you account for the size and weight of the produce, but they are very consistent about delivering on time.

Original Review: I’ve been using Imperfect Produce which is a vegetable and fruit delivery service for the past few months. Imperfect Produce aims to reduce food waste by delivering ugly and surplus fruits and vegetables to your door.  I liked the mission statement, but after a few months I felt like most of the food I was getting was labeled ‘surplus’ and prices seemed to be less competitive.   Delivery to delivery, I would often buy basics like carrots and onions that were always labeled ‘surplus,’ but if they’re available all the time are they really surplus? 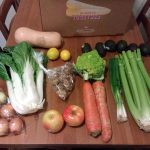 One of the boxes most things look pretty normal. 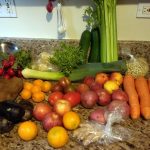 The fruits were kind of small

So I broke out my kitchen scale, and I tracked 4 deliveries (2 months worth!).  I compared the amount that Imperfect Produce sent me and priced out the equivalent from my local grocer.  Everything was compared against a direct replacement as best I could match.  To keep it fair, I also included the Box Fee ($3) and Delivery Fee ($5) that Imperfect Produce charges.

Here are the cost comparisons by delivery:

As you can see, Imperfect Produce has cost more than the grocery store on all of my boxes.  If you subtract out the box and delivery charge the prices of the actual produce and fruits are cheaper, but once you include the total cost Imperfect Produce really isn’t a deal.

The actual produce usually looks pretty comparable to what is at the grocery store.  Some of the items (espeically fruit) are often smaller than at the store, but really the most obvious things are like the carrots are almost always shaped like giant turnips and the onions tend to be either gigantic or tiny.

Items that saved the most:

Don’t use this to save money.

If you are looking to get your vegetables delivered this is totally a viable option that doesn’t cost much more than the store.  But keep in mind, you will generally end up paying more for the convenience of the having the box delivered. Selection varies week to week, so I do like using the boxes to try out different fruits and vegetables.  On top of that you’ll be helping out to reduce food waste, although I’m not sure how much of those savings are offset by the delivery and non-reusable delivery box.

Last updated:Saturday, May 9, 2020
Categories: Anything

4 thoughts on “Is Imperfect Produce Worth it?”