My energy usage has sky rocketed 95% percent year over year this summer.

The big change this summer has been that I finally live in a place with central air conditioning. It’s like living in the future. I’ve lived in places without central air conditioning–or dishwashers– for the past few years to cut costs. The weather around Chicago isn’t too bad, so I’ve been making do with a bunch of fans and a small window unit air conditioner.  I guess my cheapskate system of cooling down only a single room should be more efficient; I just never thought it would be twice as energy efficient. 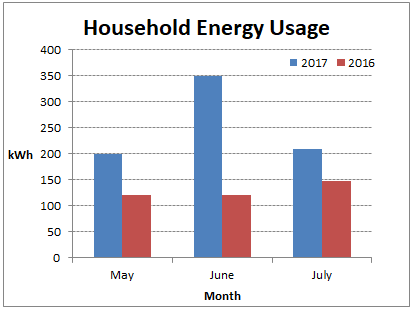 For the past 3 months, I’m roughly tracking at 760 kWh this year versus 388 kWh last year.  The weather here in Illinois didn’t start to ramp up until June, which is when the air conditioner started to kick on constantly.  Seeing the June electricity bill kicked some sense into me. I wasn’t tracking usage to closely until I saw the cost and the numbers.  I was afraid that July would be even worse, so I started to dig into the data to see what I could do.

For reference, I live in a 2 bedroom condo surrounded by other condos.  The building is brick and at least a hundred years old but with newer window, so it’s not terribly insulated. I generally keep the thermostat set to 75 degrees with schedules around times when people will be home or not.

My energy provider has a really detailed chart of energy usage by day or hour and with overlays for the temperature. As you can see from the graphs, my baseline energy usage is about $0.30 / day or roughly 3-4 kWh per day. On the days that the AC is running more, my costs/usage multiply 5x per day. 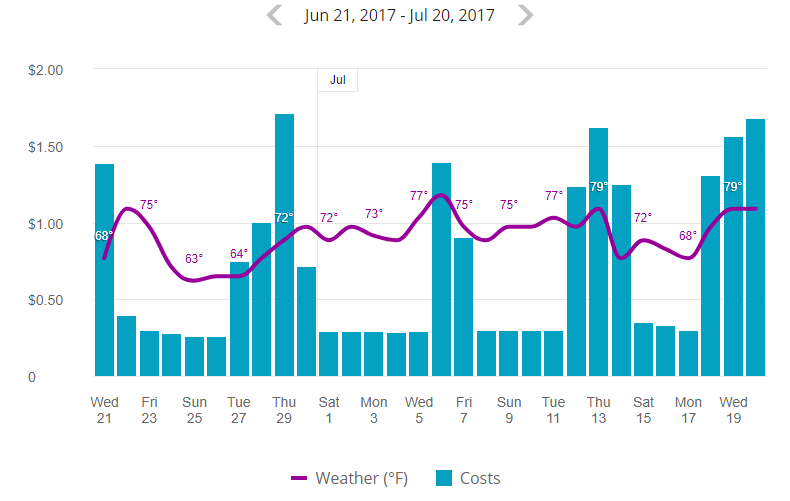 Here’s a day where I was working from home and waited to turn on the AC until the thermostat hit 78 degrees.   Lights, applicants, computers, and what not were all on the at 1pm.  All of these things barely used any energy compared to 2pm when I switched on the cooling system. 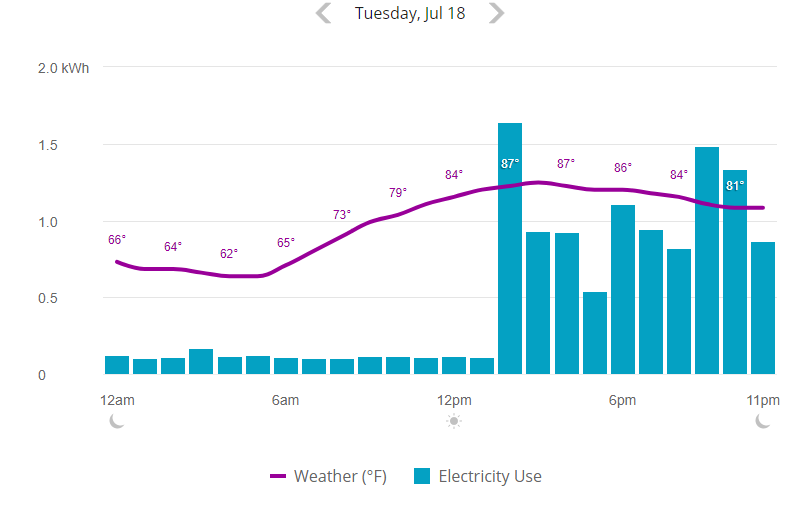 Now that I knew that the air handler and air conditioner were giant energy hogs, I started to watch the thermostat like a hawk. Previously, I was a little lazy about turning it on and off or managing the schedule. I didn’t realize that a couple hours of AC could use as much energy as the rest of my condo for the day.  I also dragged my array of fans out of storage.

So I feel a lot better now that July’s pretty much over and I was able to bring the energy usage down to a more reasonable level.  I’ve thought about getting a Nest, because the scheduling system on my thermostat is kind of clunky.

I used to think a lot about getting energy efficient lights and unplugging appliances when I leave.  But all those things are small potatoes compared to my cooling system.  At this point, I’m thinking about looking into getting our system checked out. It’s about 10-11 years old, so it’s starting to approach the end of it’s life.