Several visitors have notified me the release of the Survey of Consumer Finances (SCF) 2013 data.  In the 3 years between the previous survey in 2010, the economy has improved, unemployment is down, and the stock market has soared.  All of these factors have suggested that American’s finances (adjusted for inflation) would have improved since then.  I’m working on updating them to the new data set over the next month.

The first few publications from the Federal Reserve have shown that this is not the case, and in fact, median net worth and income is down since 2010.  This is on top of the drop from 2007 to 2010.  Mean income and net worth on the other hand have increased since 2010, which is an indicator of an increasingly unequal distribution of wealth. 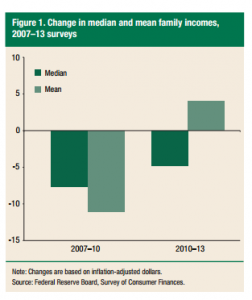 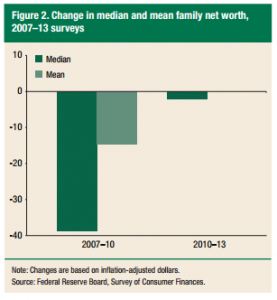 A couple other highlights:

Note the numbers might not line up exactly with the numbers on the calculators here due to inflation adjustments and some differences in the weightings used–the Federal Reserve doesn’t publish the exact weightings that they use for publications but they publish one set that is fairly close.