Bankrate recently made headlines about American retirement savings.  According to Bankrate’s August 2014 Financial Security Index, 36% of all Americans have not started to save for retirement. This is much lower than the almost 50% of Americans surveyed in the Survey of Consumer Finances in 2010 who reported $0 in retirement savings.

This is the question and the survey results: 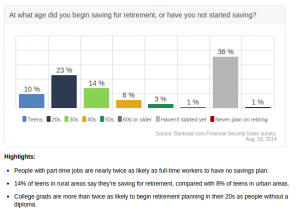 The question doesn’t ask about how much people have saved, just if they have started to save.  So I decided to compare these results to the results from the 2010 Survey of Consumer Finances from the Federal Reserve, where there is a survey question that asks how much the household being surveyed has saved for retirement, which includes IRA’s, 401k, Pensions,Thrift Savings, etc.

According to the SCF, 49.59% of the Americans they surveyed in 2010 did not have retirement savings.  So there appears to be a disconnect between people starting to safe for retirement and actually being able to accrue positive balances on their accounts.  4 years have past between the SCF survey and Bankrate’s 2014 survey, but recent news sources have shown declines in median networth during recent years.  Almost 64% of Americans have started to save but only 40% have retirement account balances above $10000.

This situation highlights one of problems with saving retirement, stability.  Half the battle is beginning to save, and the other half is being able to save enough to make a difference.