I’ve been feeling an itch to learn new things in a more formal setting. There’s a lot of options from self learning, graduate school, and, recently, boot camps. I’ve been seeing a lot of ads for Data Science boot camps as an alternative to a traditional 1-2 year masters program, so I decided to investigate.

Pros and Cons of a Boot Camp
The pros of a boot camp over a normal college setting are:

On the other side, it looks like the boot camps focus less on statistics and math than traditional programs. If I were to go to a boot camp, I might not be as qualified for certain kinds of positions. Reputation wise, boot camps also are less well known compared to the local colleges.

In my area, there are 2 well known camps: Metis Data Science and General Assembly. They both look pretty similar, and they cost about the same for a 12 week boot camp (General Assembly costs $13,950; Metis Costs $15,500). I decided to focus on Metis because it was easier to track their students via LinkedIn.

Before the Metis Boot Camp

On LinkedIn, a lot of students at Metis list themselves as Data Scientists or Fellows at Metis, which made it easy find former students and trend their outcomes.  I ended up going thru 60 LInkedIn profiles of former students to build up some general trends on the impact of the program. 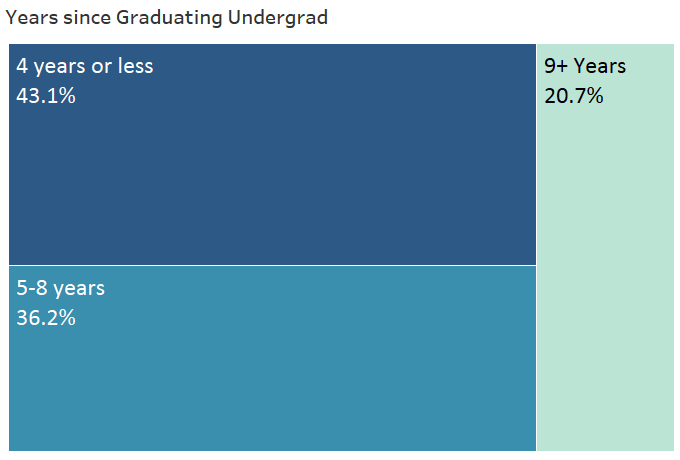 One of the things I was interested in was how experienced the typical boot camper was on entering the program. By subtracting their undergraduate year from the boot camp start date, I got some generalized figures on the experience levels of the students.  The age of the student body tends to skew younger with around 80% having 8 years or less of experience after undergrad. The majority of the students are probably in their 20s and early 30s.

The students had varied backgrounds, but a lot of them were previously in analyst roles or computer science related fields.  I was also wondering if people doing the boot camps were unemployed or if they quit their jobs in order to start it. 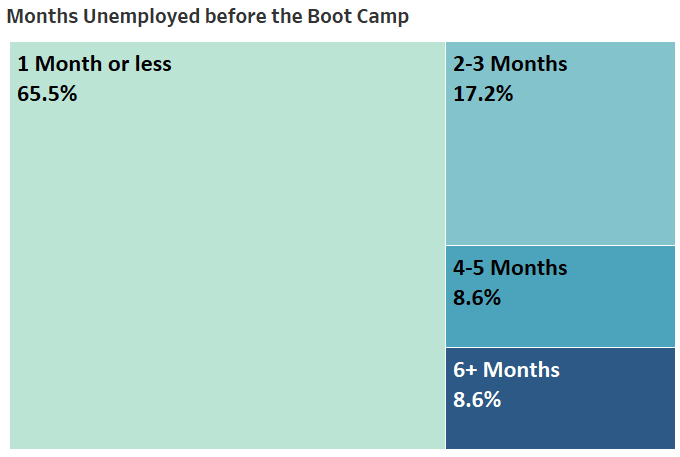 The majority (65%+) stopped working at their previous jobs within a month of the boot camp start date.  Around 17%, look like they were unemployed prior to the boot camp for at least 4 months. A few of the students took leaves of absences from their previous employers. If you have that flexibility, definitely consider using it. I personally want to pick up some skills that might be hard to learn on my own.

After the Boot Camp

I did a subjective categorization of each LinkedIn profile into categories of:

For the most part, students ended up in roles that benefited from the skills that they were learning at the boot camp.  A sizable number held similar roles as before the courses, but there is the potential that they were able to find jobs with better pay or work life balance. 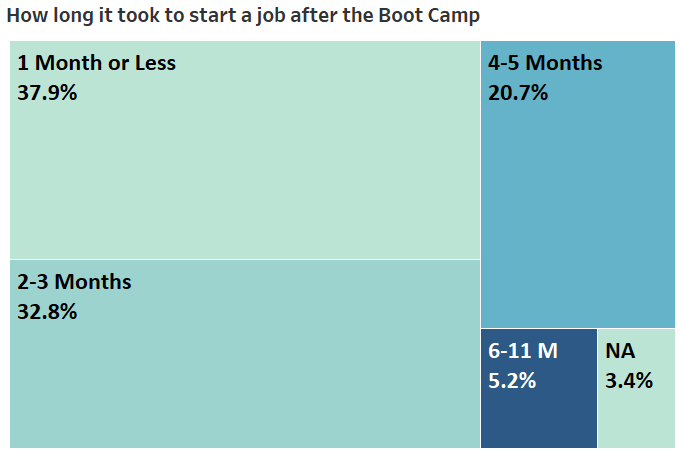 A lot of graduate programs publish 3 month placement rates after graduation as a metric of student success.  For top 50 ranked business schools, the 3 month placement rates are at 90+% for a MBA. From my data set it looks like around 70% of the boot camp graduates are employed, which is pretty solid for a 12 week course with a limited track record.  The average number of months before starting their next job is about 2.7 months.

Will it Be Worth it?

The out comes of the boot camp seem pretty solid.  For the most part, the students seem to come out of the program in a better place and at least not a worse position career-wise.

The part that worries me is that the boot camp is a 6 month commitment. 3 months in training and then 3 months afterwards to hustle and find a job. 6 months of lost wages plus the $15k tuition makes the prospect of going through with a boot camp a little harder to swallow.

Factoring in my current compensation, this would put me around $65k+ in the red. This is a pretty big financial risk, since I’m considering going for early retirement. $65k would put me back maybe 1-2 years in terms of saving.  Compensation wise, I would probably stay with in the same range or even have a minor pay cut depending on what roles would be available locally. I might get some intangible benefits from the boot camp, like finding a job with a better fit.  But, maybe not.

For now, I think I’m going to tuck the prospect of applying to a boot camp in the back of my mind, unless something unexpectedly negative happens at work.  I think that the boot camps definitely have a very strong value proposition, but your mileage may vary.

Notes on the Analysis

I don’t know how many people graduated every year. It’s hard to tell if I have enough samples in my data set to be fully representative.  These numbers are mostly what I was using for my own personal planning and decided to share.

Metis appears to have started only a couple of years ago, so most of the people I tracked graduated from the boot camp in 2015 and 2016. I excluded anyone in the most recent January 2017 boot camps, because they are just about to finish now.  NYC graduates comprised of 76% of my set and SF grads were the remaining 24%. No one from the Chicago and Seattle programs showed up in my LinkedIn search.

2 thoughts on “Data Science Boot Camp: Will it be Worth It?”