Hover or click on the graph for more information.

The original Consumer Expenditures Survey considers retirement contributions as an expense, and even with adjusting those into savings 37.5% of households still spent more than they earned. Recently, there have been many studies reiterating the lack of savings that Americans have on had for emergencies. This data aligns with those earlier views on the poor health of the average American’s finances.

These results are calculated using the 2015 Bureau of Labor Statistics (BLS) Consumer Expenditures Survey (CEX) microdata. The microdata has survey results for a sample of 30,000 US households which are used to estimate the spending and income of the total US population. The data is weighted on a variety of factors by the Bureau of Labor Statistics so that the households sampled model reality. I used the pre-built SAS macro for the 2015 data to merge the interview with the diary files and aggregate expenditures by survey household unit. The interview and diary don’t link on a 1:1 ratio, so I allocated the diary expenditures across each survey household in the interview files. Each survey household was allocated a variable amount from the diary expenditures based on the household unit’s income, expenditures reported in the interview files, and population weight. I also took steps to ensure that the rolled up results still matched the published statistics on the BLS.

If the interactive chart didn’t load for you, here is an image of the chart. 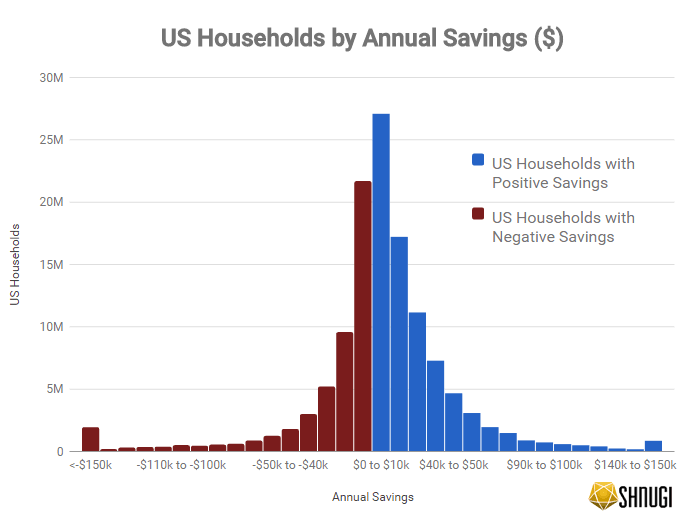 17 thoughts on “38% of US Households Spend More Than Income”