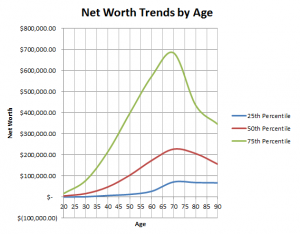 There are many misconceptions about American wealth.  A common one is that Americans are heavily indebted. As this graph demonstrates most American have a positive net worth, even at the 25th percentile.  Net worth includes assets such as houses, stocks, retirement accounts, etc as well as debts such as mortgages, student loans, and credit cards.  You can follow the general trend of people saving more and more as they age.  This trend reverses around the standard retirement age of 65-70, and people begin to draw down on their retirement savings and other assets to pay for living expenses.  The drop is most drastic for those that are in the 75th percentile, which may be due to many causes such as retirees continuing to support the same level of lifestyle that they lived while they were in their income earning years. 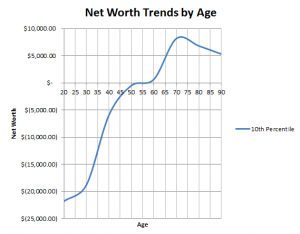 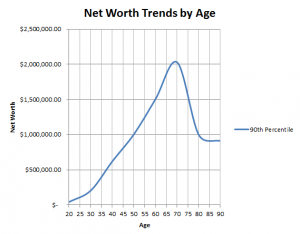 You can calculate your own net worth percentile using our Net Worth Percentile Caclulator.

These graphs were generated from data from the 2013 Survey of Consumer Finances.